Located approximately 25 miles south of Nashville, amid the rolling hills and pastoral countryside of middle Tennessee, the inviting Town of Thompson’s Station is a great place to live.

Between 1778 and 1812, as a wave of Americans began migrating into the nation’s untapped interior, many settled in and around present day Nashville. In 1780, a young man named Edward Swanson was the first to stake a claim to land 2nd group arrived in the Harpeth River Valley in 1798.

The Town of Thompson’s Station was known as White House in the early 1830s, then Littlebury in 1836, apparently after the postmaster then, Littleberry Starks. It wasn’t until 1856, when Dr. Elijah Thompson donated the land on which the village was built that the name Thompson’s Station took root.

The first trains rolled into Thompson’s Station in August 1855, sparking the village’s growth as a shipping center. Farmers from surrounding areas drove their hogs, sheep and cattle to Thompson’s Station to be loaded onto trains and taken to market. The railroad remained a big part of the town’s life through the 1940s, when chemical companies relied on trains to transport the region’s phosphate rich dirt to processing plants. However, as the highway system and trucking transport grew, rail traffic faded and the town’s depot was torn down in the 1950s. A new depot was constructed in 1996 and now serves as the Town Hall.

Role in the Civil War

During the latter stages of the Civil War, Union troops garrisoned in Nashville and Franklin frequently reconnoitered and foraged for food as far south as Thompson’s Station and Spring Hill. In the spring of 1863, the Federal Army made several expeditions into the area to collect food and hay.

On March 5, in Thompson’s Station, Confederate General Earl Van Dorn defeated Union troops under the command of Colonel John Coburn, who was captured along with 1,220 of his men. The battle was decided by a cavalry brigade under General Nathan Bedford Forrest, which overran the Federal left flank and split the Union soldiers. During the spirited fighting, General Forrest’s famous mount, Roderick, was killed.

Roderick is reportedly buried in Thompson’s Station at Roderick Place, where a monument to the heroic steed was dedicated March 5, 2008. On that date in 2009, the inaugural Roderick Award of Courage was presented to Williamson County resident Maddie Adams, who used the Heimlich Maneuver to save her grandmother from choking.

As more and more new residents began moving into the area, Thompson’s Station held an incorporation referendum in 1990. The measure received overwhelming approval and, on August 15 of that year, the community officially became The Town of Thompson’s Station. The Town is governed by the Board of Mayor and Aldermen (the mayor and 4 aldermen). A total of 7,485 town residents were certified by the 2020 Federal Census. 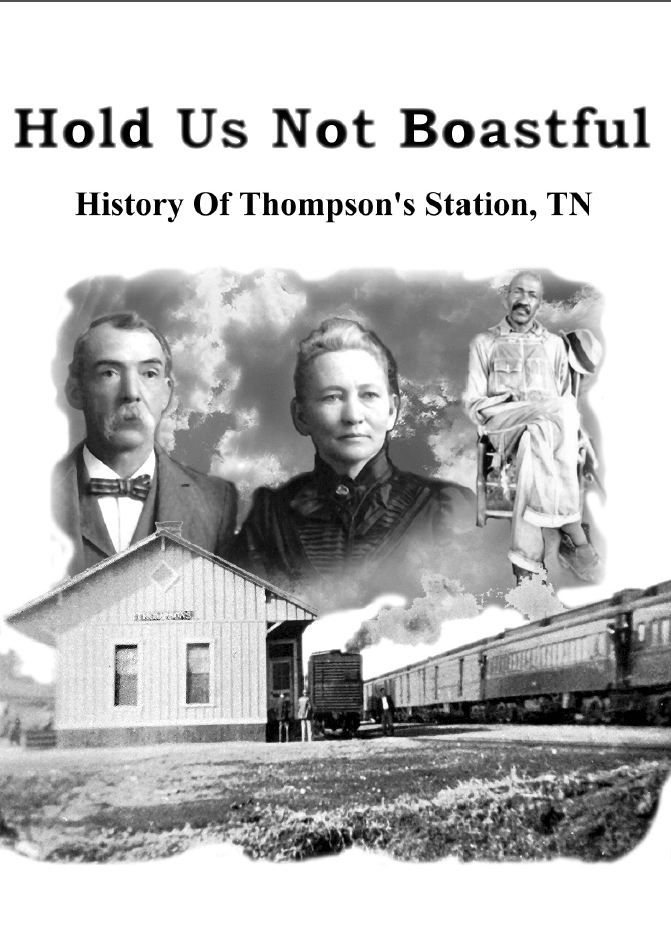 Life-long resident and historian Sue Oden published the history of Thompson's Station in her book Hold Us Not Boastful  in 1996.

The Town recently interviewed Sue and her husband John and discussed how the Town began.  Click the picture below for the video.