[Wikipedia: A charrette (pronounced [shuh-ret]) . . . is an intense period of design or planning activity.]

The document establishes the zoning standards that guide future residential and commercial developments in the Town.

The LDO is separated into 5 Articles or Sections: 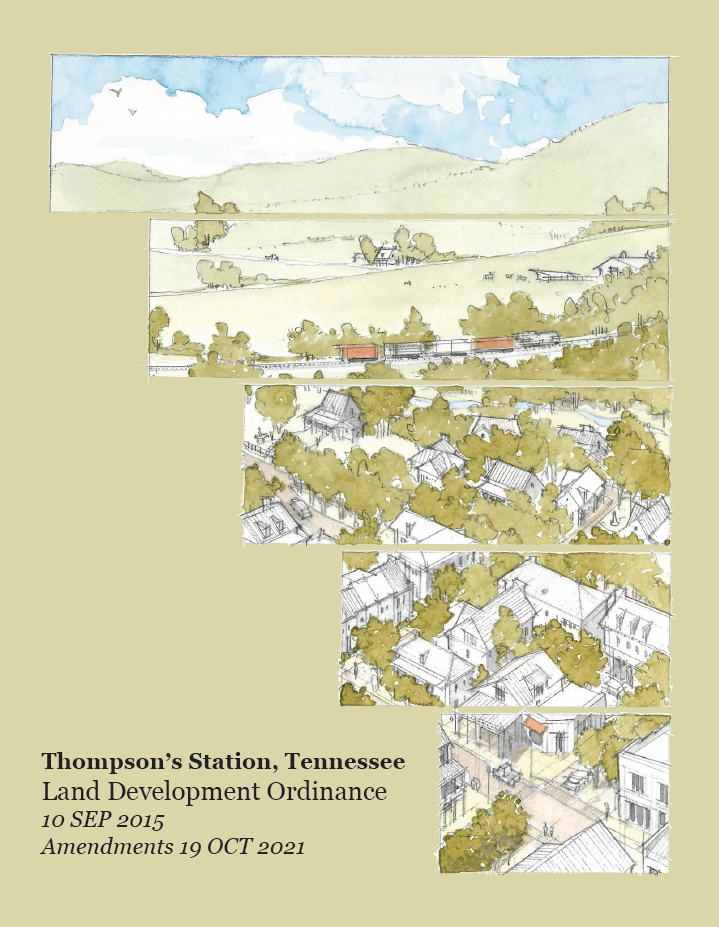 In 2016, the Town of Thompson's Station won two awards for the new Land Development Ordinance that was enacted the previous year.

Alderman Brandon Bell said that he represented the Town of Thompson’s Station . . . at the Tennessee Municipal League’s annual conference in Gatlinburg, where the town received the Small Town Progress Award for the work done on the new Land Development Ordinance.

“My understanding is that’s a state award,” said Mayor Corey Napier. “It represents the collaborative and consensus-building process we went through last year to look at our Land Development Ordinance and the intended code that went with it.”

The Town also received a national award, the Driehaus Award, national recognition from the Form-Based Codes Institute located in Detroit.

“This is the form-based code Driehaus Award,” said Town Administrator Joe Cosentini. “It’s not one that’s given out on an annual basis by the Form Based Code Institute. There’s a panel comprised of urban thinkers from around the country that evaluate applications for this award. They don’t give it every year if all the applications don’t meet a certain standard. We got an honorable mention.”

Former Town Administrator Cosentini added that a panel evaluates the process a community goes through to write its form-based code. In particular, the panel looks for unique components of that code, and Mr. Cosentini added that the Town of Thompson’s Station had a couple of unique aspects, such as its signage requirements, open space requirements and street cross-sections.

“It’s a very good recognition for the town and a lot of work went into this code,” Cosentini said. “People around the country looking at it and saying, ‘This is unique and you guys are doing what you should be doing from a new urban planning perspective.'”

Town officials passed their new Land Development Ordinance last fall after spending the large part of 2015 composing it. In response to pressure for development and a desire of residents to maintain a rural character, the town ultimately produced “transect districts” as a solution.

The transect district, more commonly called form-based code or smart code, is a newer principle in land planning that tends to promote clustering of development to allow for preservation of open space.

“What they were patting us on the back for is we’re looking out 20, 30, 40 years down the road and saying, ‘We know growth is going to happen here, and this is how we are going to address it,'” Napier said. “What this was acknowledging was that we are still considered a somewhat rural, agrarian area, but we know that’s changing with 840 and with the popularity of Williamson County and Middle Tennessee.”

Find out more about the Town's Driehaus Award at the following site: https://formbasedcodes.org/codes/4095/

History of the Land Development Ordinance

Working with the Placemakers LLC in 2015, Town Officials and Staff worked to create the Land Development Ordinance with Public Input that updated the Town's Zoning Framework.  Below is a slideshow of the Town's submission for the Driehaus Award which explains the project, workshop results, and previous framework with illustrative plans.  (Next Stop Submission - PDF)

Visit the Next Stop: Thompson's Station Webpage that gives an in-depth look at the history of the Land Development Ordinance.